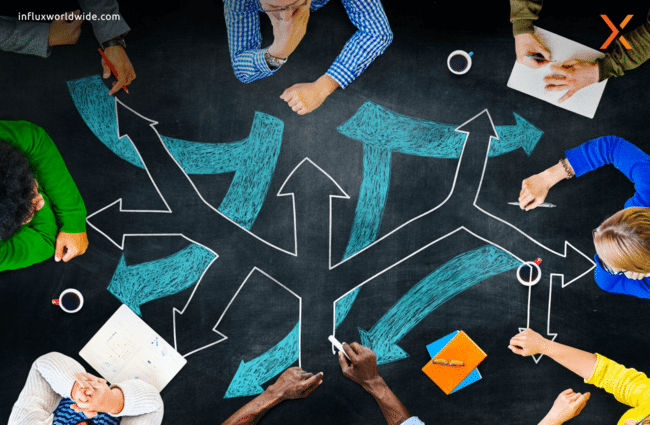 It’s the last day of 2017 and while I sit back in the super-relaxed environs of my buddy Rahul’s apartment in Goa, I’m reflecting on what a great year 2017 has been for me - personally and for Influx. As I look forward to 2018 with renewed vigour, the one thing that definitely is top-of-mind for me is for Influx to be a more decentralized organization in the upcoming year.

This year saw three major new forces join us to augment our leadership team. While Amit worked alongside me to seriously take control over our international business development efforts and Naga furthered our tech strength, Dodo, Aditya and Aum came on board to lend weight to operations, performance marketing and social media marketing respectively. However, in order for Influx to really evolve and operate as a well-oiled machine that keeps Building Great — without people breathing down each other’s necks — what would be important is to decentralize decision-making, as far down the line as possible.

I’ve been working on a decision-making guide that I’d like to gift everyone at Influx, at the start of 2018. If followed sincerely in both letter and spirit with no fear of repercussion or blame, I’m sure it’ll benefit everyone in contributing towards making Influx do better and bigger this year.

Feel free to make any decision on behalf of Influx as long as the following conditions are met: #

As long as the decision being taken doesn’t cause any or all of the above, go ahead and take the decision.

Think it might be causing one of the above? Feel free to discuss with a colleague who you trust, make the decision, and then inform your manager / reporting colleague.

If it causes more than one of the above, the decision probably isn’t a good one. #

The above applies to every single person — irrespective of role or rank — who counts themselves a part of Team Influx. The success of the programme would be had when juniors make decisions and learn from wrong ones, with seniors showing them the right way out of such mistakes.

I’m a firm believer that effort matters more than quality when you’re new in any organization and the above is designed to encourage researched effort and not punish those on the stepping stones.

If each of the six of us mentioned at the start of this post spends 20% less time this year than the last in giving feedback or approving stuff, we’d easily do doubly as well as we did in 2017.

Here’s to a great year ahead. #

*Harish Anand Thilakan is the Founder and CEO of Influx. His journey as an entrepreneur began twelve years ago, when he was still in school. When his parents would have preferred him to be studying. He says he learnt by trial and error, but we believe it’s more than that. Written above is what he believes is most important in decision-making at Influx.

Hi! I am Carrie Dietrich and recently joined as the SVP Business Development at Influx Worldwide. If you haven’t read the blog about my joining this swanky tech company, here is the link. There are a few main reasons I’ve chosen this... Continue →