Influx is a cornucopia of cool ideas – not only for its clientele but also when it comes to entertaining its employees. Last Friday was no exception. Everyone was working like usual, some a little stressed to finish the work on time and some waiting for inspiration to kick in, before the weekend. That’s when we were ushered to the sunlight area and we gladly embraced the break.

What caught our attention was a big colourful bowl, two cups, and plastic straws. We couldn’t make anything out of it until we saw thermocol balls in the bowl. As usual, our minds came up with weird ideas, but our HR’s voice stopped our train of thought…the props displayed were for a game. 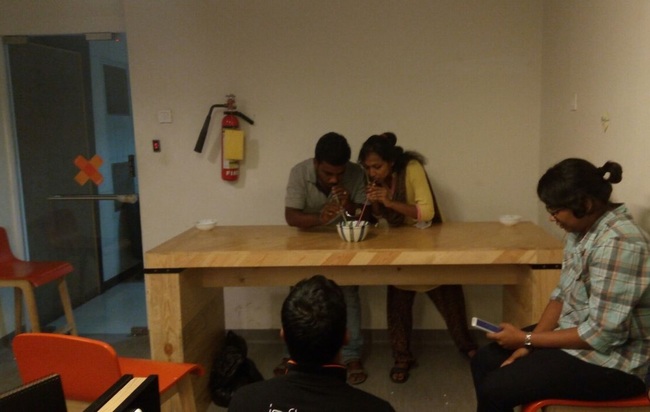 Each player has to suck the thermocol balls with the help of straw and shift it to the empty container without dropping them.

First to step in and play were Balaji and Selva Ganesh. It was hilarious to watch them pick the thermocol balls with straws and transfer it to their respective cups. Some balls fell on the table, some on the floor…there were plenty of oohs and aahs from the crowd. 30 seconds later, Balaji emerged victorious.

Next in line were Arun and Suresh. Both men were neck to neck and a few seconds later the referee (our HR) announced that it was a tie. The timer was reset and the players were pitted against each other again. This time around, Suresh won.

Sivagopi and Muneeswaran stepped in. After seeing four players do this simple task, both of them seemed confident. 30 seconds later, Sivagopi was announced the winner.

The last players to step in were Sripriya and Saraswathi. After seeing so many examples, both of them had devised easier techniques and collected a lot more thermocol balls. At the end, Sripriya emerged as the winner.

Now, everyone was interested in the game. We realized that there was nothing simple about it. The players were good and we cheered for all, encouraging them every step of the way. It was a close call; the finalists were Balaji and Sripriya. 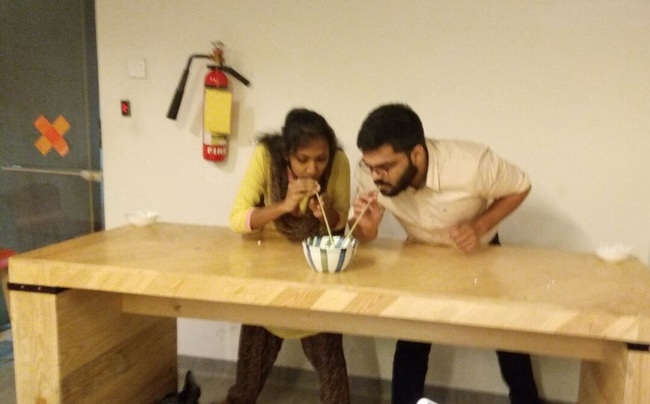 This was an interesting turn of events. Both of them were Influx champions and had won many challenges. It was definitely a nail biting game. After winning two games, they really got the hang of it. Every second and every movement mattered. One minute later, Balaji was declared the winner - his champion status intact.

And what did the champion get? A KEF headset.
After an amazing fun Friday, we can’t wait for the next one!

Asana vs Flow: Which Task Management tool is best for a digital agency?

by Shyam G Digital agencies are notorious in IT circles. The line between work and fun is thin and hazy. Creativity is the mantra, chaos comes free. Influx thrives in chaos and revels in creativity. But order is a must, which brings us... Continue →