It was just another day at Influx, the usual passing hours of retainer work, accounts and ready to get married couples. Diligent designers, thundering techs, wide-eyed writers and the ever so busy business development team, working their magic as they always do.

Our charismatic Chief-in-Charge (who just happens to be bald at the moment, which I must admit, IS F*#% SCARY!) came in to spy on the work that was being done. He didn’t look happy, oh no!

What happened next is probably because we hit the “bald” spot.

There was a wide range of mixed feelings that day. The clock finally struck 5 pm, but there was only one thing on everyone’s mind…. They all knew that there was still enough time for something to happen!

5:02 PM – A loud bellowing voice stops every single employee at Influx. Everything is still! Everybody panics! Some are praying to Jesus, some to Satan, some had no idea what was happening at all.

There was no turning back now. Each and every one of us knew that we had to face whatever was coming our way. Judgment day was finally here. The throbbing vein on his forehead told us so.

Everyone was called to the “Room of Judgment” (as we now call it).
Sweaty hands and nervous expressions as far as the eye could see.
Even the sector heads looked as if doomsday had come early this year.

The chief stared across the room, down at his meek flock of sheep, as they stared back at him, wondering who was the first to the slaughter.

Everyone circled around him, as sheep would to the Shepard, ready for the not so greener other side.

He started by saying how disappointed he was. Apparently he’d been observing us when he was here. Some of the smiles had already turned into frowns… But nobody asked what or why.

The chief had deemed us all “Unfit to work at Influx”

Turns out, he was deeply disappointed in each employee’s fitness and health.

This might have been considered as punishment but the chief managed to turn it into a competition. With a pretty looking reward, of course!

How many of you know what burpees are?

Well, good for you because truth be told, not a single employee at Influx knew. One person at least tried to take a wild guess. “A burping competition?” he asked with puppy dog eyes. Half of us were already rolling on the floor, laughing our guts out… But hey, at least he tried.

Our CEO, the reigning champion of the burpees dimension, came forward to demonstrate what a burpee is. He jumped up with his hands in the air, landed on his feet and immediately did a push up, repeating the action a few times. Now everyone knew what a burpee was. Some even pretended to have kept quiet in order to give others a chance.

*It started with burpees for men. *
With a 30 second ticker, the one to pull off the most burpees would walk home with the spoils of victory. Most of the contenders felt a rush of confidence in them. “It does not look hard at all!” they said in unison.

By the end of the semi-finals, the daring designers, twinkling techs, bubbling business pros had already given the cleaning lady a run for her money. Sloppy performance and a shining Influx floor had left us all in gales of laughter and gasping for air. The witty writers hiding in the shadows, afraid that they might need a stretcher if their names had been called out.

Two youngsters, Vikram & Balaji, gave it their best and ended up with a tie and moved on to the finals. The semi-finals ended with a mind-blowing performance by the CEO, who by far, outpaced the youngsters – proving that experience and fitness far outclasses new age machines and video games.

Next up were the push-ups for girls.
It was eventually changed to sit-ups as the sly women of Influx used their tactical skills to cheat their way through.

First on stage was Sripriya, who’s amazing spirit but shady technique got her to a count of 17, under the 30 second ticker.
Jessica was up next, after much convincing, who also hit a record of 17, securing her position in the finals.

The semi-finals ended with Minnie Mouse (Our beloved Head of Accounts, Shyama) setting a spectacular record of 21 in 30 seconds.

For some reason – the heads at Influx are in a completely different league compared to the youngsters – which is not a good sign!

The Finals, at last!

Jessica and Sripriya, both looking tough and raring to go, face off each other. 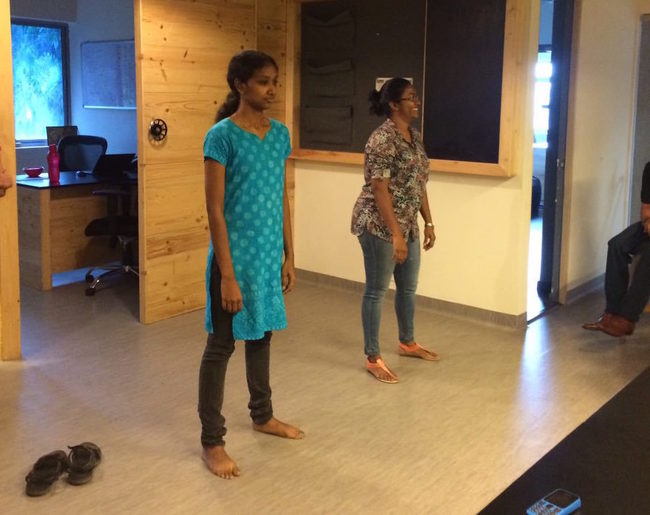 The count down began and both of them were on a great start.
Jessica loses control for a second but manages to get back on the race, while Sripriya was racing away to glory. Both managed to hit 20 by the clock, but Jessica walked home with the prize as her technique was more refined.

No one seemed to notice Jessica’s legs give way as she did the winner walk back.

Boys were up next.
Balaji and Vikram go at it like rabid rabbits, bumping every thing in sight.
Balaji being much faster but with sloppy technique, Vikram being much slower but with refined technique. Once again, it ended in a tie between the two speedsters.

While we were all blank, the Mottai Boss suggested that we end it with an arm wrestling match between the two. Hoots and toots of excitement was in the air. 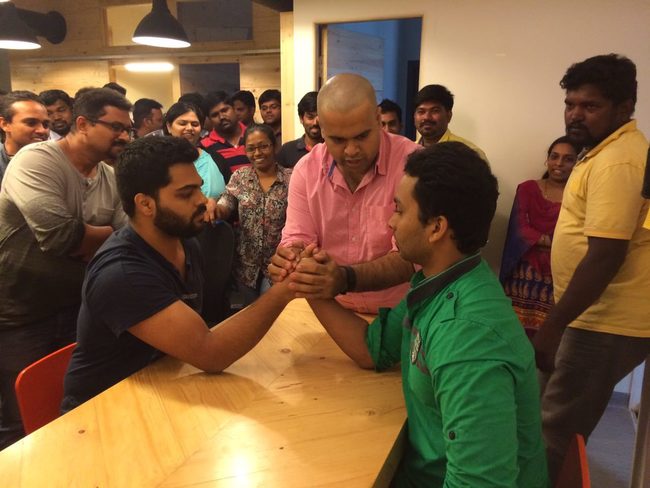 Everyone gathered around the discussion table, now cleared up and renamed as the “Arm Wrestling Table”. As the chief explained the rules of arm wrestling, the two young contenders looked at each other with sheer grit, trying to intimidate the other.

Round one ended in a stalemate.
Round two and three was Balaji’s for the taking.

The clever youngster, instead of using brute force, got the opponent tired and slowly crept his way to victory. Smart…

Our little event came to an end with this, everyone was turning away – returning to whatever work was left. They all left with one thing on their mind.